Every business may one day have their own mobile app

Every business may one day have their own mobile app

Phone makers have long told us that the lowly handset would one day replace the mighty PC at the center of our digital lives.  People from all economic backgrounds, all over the world are starting to have cell phones and smart phones.  Many are now also adopting netbook and tablet technologies.  That said, apps are becoming more and more popular and popularity will only continue to grow with the number of smart phones and tablets.  Wordpress and many other CMS’s are now mobile friendly and have plugins that integrate with these CMS’s to provide businesses with their own easy to implement mobile app.  This technology will in turn make way for many mobile and php jobs.  Soon enough, every business may have their own app, much like most have their own website today.

The Growth of Mobile

Stats and figures that will shock you! 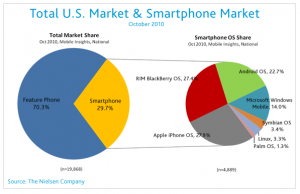 Nobody suggests yet that the PC is going away. Running a complicated spreadsheet or editing video still requires a big screen and powerful processors. But evidence is growing that phones are poised to displace PCs for most of our computing.

Here are some benefits as to how an app might help your business.